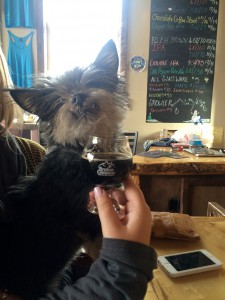 Colorado is home to almost 300 craft breweries, and up in Summit we are lucky enough to have some of the best. After visiting all of the breweries in Summit County and taste-testing all of the beer, I have compiled a list of my favorites. I just have to say, I really enjoyed doing all of this research.

This place is awesome; delicious beer, a chill ski-town vibe, good people, and you can even bring your pup! The Broken Compass has only been open for 16 months, but they are crushing it! They usually have around 12 different beers on tap, rotating a few seasonal beers around. I ordered a “flight” of seven different beers, which means I got seven small beer glasses so that I could sample the different beers they offer. In the picture featured above from left to right we have: Hefeweizen, Pumpkin Pie Stout, Coconut Porter, IPA, Double IPA, Ginger Pale Ale, and Chili Pepper Pale Ale.

Coconut Porter: This one was seriously amazing, which was unexpected because I usually don’t like coconut or porters. I felt transported to a tropical island; it was bliss. This beer tasted like liquid creamy Almond Joy deliciousness in my mouth. I could have drank a whole gallon.

Ginger Pale Ale: Perfect harmonious notes of spicy ginger (not overwhelming, but it’s there on the back of your throat) and also a tart edge. Yum.

The only downside to this place is that there is no food. But in my opinion, that’s not a deal-breaker because their beer makes up for it. If you live in Breckenridge, visiting here, or just passing through, “get lost” and stop by Broken Compass for a few brews and good times.

Bakers’ is also really new to town. They opened in March of 2015, so it’s been about eight months of business and they are dialed in! The beer is spectacular and the food is amazing (they are even open for breakfast). Seriously this is the place to be. They are also a bakery, (hence the name Bakers’) and create all of the baked goods that you will see on their menu. They usually have around eight beers on tap with a few rotating and seasonal beers. Right now they have Barkin’ Dog Brown Ale, Cotton-Mouth Killer Session IPA, Buzz-Bird Belgian Honey-Wheat, French Silk Stout, Fall Saison, Intense Bike Rider Imperial Belgian Red, Rye’d Open, and Cory’s Crazy Infusion Confusion. Brewmaster, and (probably) genius, Cory, is constantly pushing the limits with creativity and “brewing” outside the box. The Infusion Confusion is his own unique small batch (5 gallons) of madness. In the past, he’s done beer with Tequila soaked black cherry wood chips, pickled jalapeños, rose buds, tart cherries, crushed blueberries, and more. Once the batch is gone, it’s onto the next creation! I ordered a flight of the Cotton-Mouth Killer Session IPA, Rye’d Open, Fall Saison, and the Infusion Confusion which was an Apple Pie Rum Barrel Brown.

Cotton-Mouth Killer Session IPA: This IPA was light on the hops, and gentle on the palate. A smooth, easy drinker that balanced the bold citrus and herbal flavors perfectly.

Apple Pie Rum Barrel Brown: This was the current Infusion Confusion on tap, and I think it might have been the best beer I’ve ever had. Cory took apple wood chips and soaked them in Captain Morgan, giving this beer multiple dimensions and deep, rich flavors. It was impressive.

This place is super chill, friendly and attentive staff, and the beer and food is on point! Definitely make a stop here if you are up in the Summit County area. 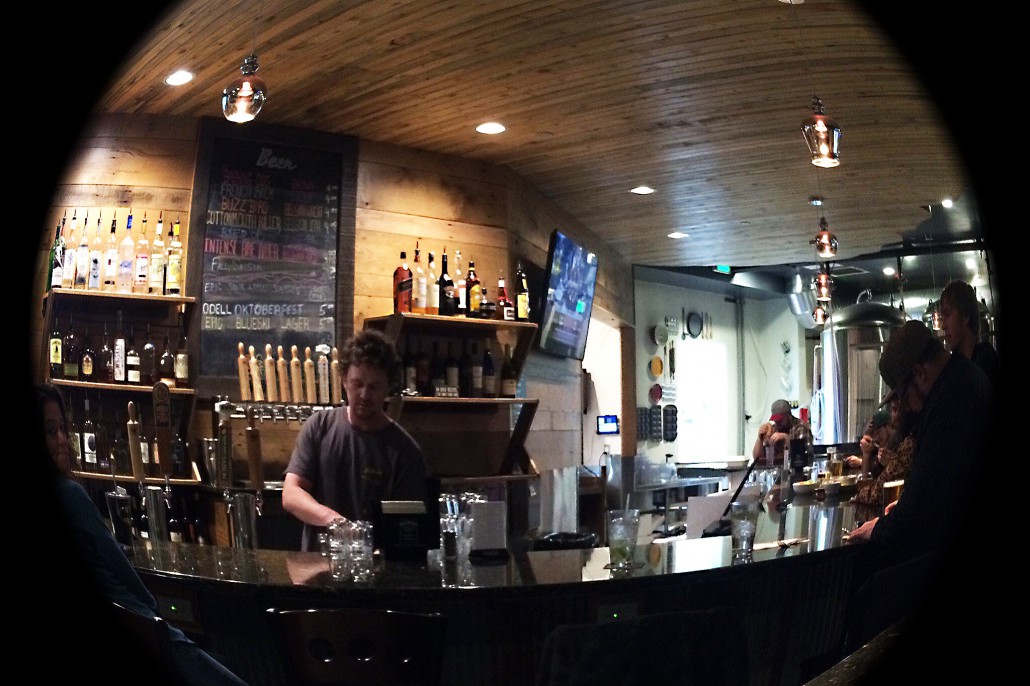 Breckenridge Brewery is Summit County’s oldest brewpub, opening its doors back in 1990.  It is the perfect destination if you want hand-crafted beer, good food, and an unbeatable ambiance. It’s a great location right in town with a lot of room inside! This isn’t your typical bar food either, they step the elegance factor up a bit in this category. Breck Brewery usually has eight beers on tap at a time. When I went there, they had Kensho Kölsh, Agave Wheat, Pineapple Gose, Belgian Pale Ale, Avalanche Amber Ale, Lucky U-IPA, Vanilla Porter, and Uncle John’s Chili Autumn. I got a flight of all eight… and I approve of all eight. I can’t get enough of that Agave Wheat. 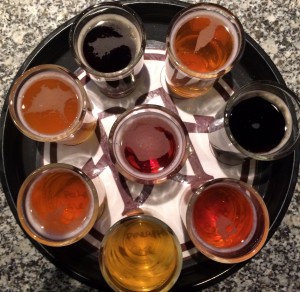 The Dillon Dam Brewery has about 10 beers on tap at a time with some rotating seasonal brews. I have to say, they have some Dam good beer! (Sorry, I had to.) They brew about 1,700 barrels per year making them one of the largest independent brewpubs in the nation! Their food is also on point with a pretty extensive menu. Throughout the week, they have killer good deals on beer and apps making it the place to go if you don’t want to spend a fortune on good craft beer. Dillon Dam also has live music going on every Thursday night which I’m a huge fan of. Thursday night is also ladies night… free half pints and $3 pints, Fireball, and Jagermeister for everyone. Free music AND free brews? Count me in.

Backcountry Brewery has been doing its thing since 1996 and is a well-established brewery and restaurant here in Summit County. There is a section of the restaurant with super comfortable couches and a cozy fireplace. Perfect place to kick your boots off, relax, get some food, and drink award-winning craft beer after a full day of skiing. This brewery has won countless awards over the years in all sorts of beer competitions. To name a few, the Great American Beer Festival, Colorado State Fair, and the North American Brewers Association. They also pair every item on the menu with the type of beer that would go best with that specific dish, which gets a big thumbs up from me.

Pug Ryan’s has also been around for a while, starting up in 1997 and still going strong to this day. They also have many award winning beers including their Peacemaker Pilsner, the Scottish Ale, and their seasonal Helles Bock. They also have another location, which is a part of their restaurant (but with a different menu) called the Tiki Bar which is located at the Lake Dillon Marina! It is an awesome spot with unparalleled views, especially if you get there around dinner time to watch the sun set behind the mountains.

I bet you really want a cold one now… I know I do!

Is it happy hour yet? 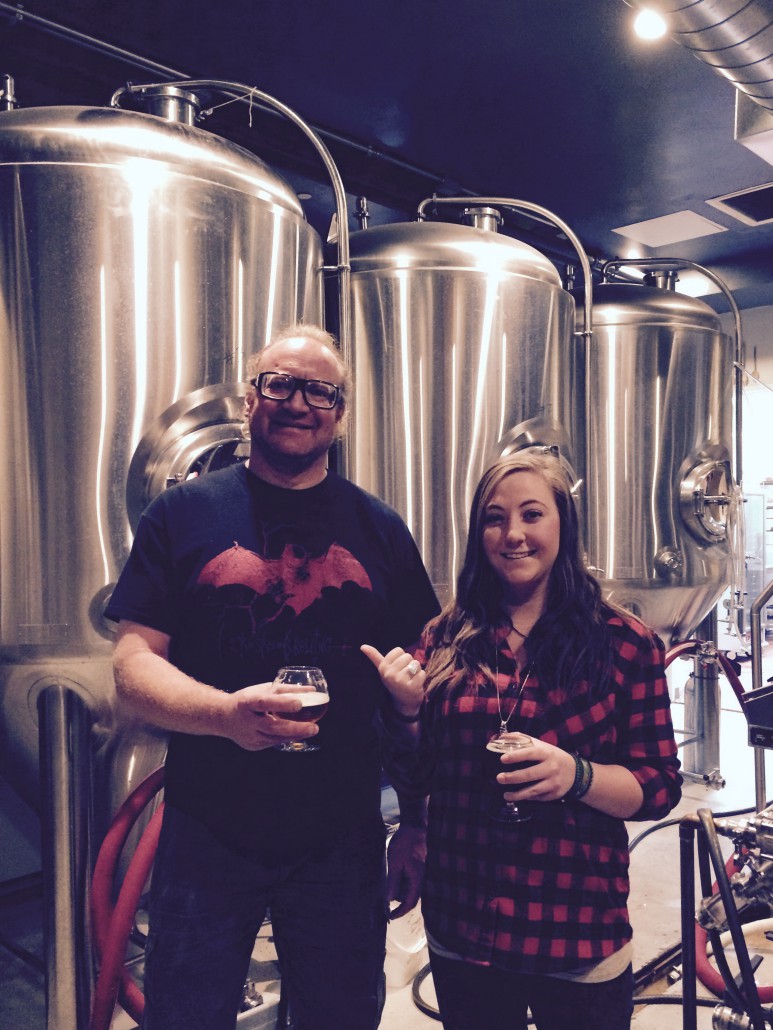 Brewmaster Cory and myself at Bakers’ Brewery

Happily Ever After: Breck Wedding Finale

Five Reasons to Come to Breckenridge on Weekdays

How to Save Money on your Trip to Breckenridge

Wake Up Breck!
Scroll to top